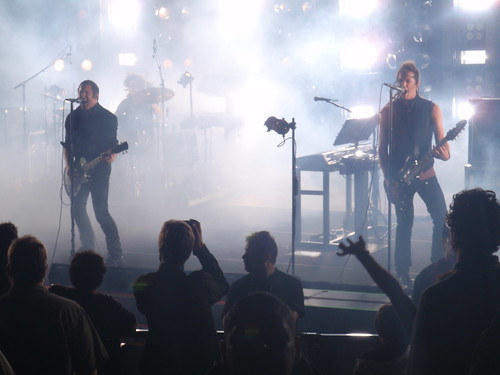 To wrap up our 2009 RelEng intern orientation program, John Ford went with Aki and myself to see Nine Inch Nails live in Shoreline Friday night, just a few minutes walk from the office.

Aki’s a real fan, as you might guess. It was only my first time seeing them live, despite having all their albums for years. When we discovered John Ford didn’t know them at all… well… we just had to fix that!

Despite the crowds, Shoreline was cold – so much for warm California weather – and while I was slightly cold in my Firefox fleece, John Ford kept claiming he was fine in his tshirt because “he’s Canadian”!?!? 🙂

NIN did a great job of picking all the tracks I really liked the most (!), over all their albums, and having really great transitions from one piece to other. Lots of photos here on flickr. All in all, a great night out, and a great way to start the Memorial Day long weekend here – many thanks to Aki for getting tickets before they sold out.

ps: We definitely had nothing to do with the Mountain View police car stolen at the concert and then found two days later.

This site uses Akismet to reduce spam. Learn how your comment data is processed.

This work is licensed under a Creative Commons Attribution-NonCommercial-NoDerivatives 4.0 International License.